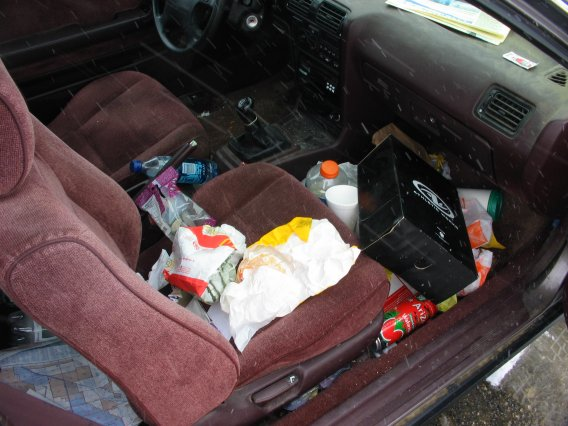 Happy New Year! Many of us can attest thata new year often brings new resolutions involvingnew lifestyle changes, and re-organization of our homes and ourselves. But often forgotten is the organization ofour cars.

Messy cars with loose objects can send dangerous flying projectiles if you brake quickly or if you are involved in a collision (car insurance claim). Some car designs also allow larger items stored in the back such as grocery bags, suitcases or golf clubs to fly out and strike passengers. This is a hazard that can cause very serious injury. It is especially interesting to note that when you brake suddenly to avoid a risk, these flying objects may end up being the only damage done or the only injury sustained.

Investigate the possibility of installing a barrier to prevent objects from flying forward from open trunk space and don’t allow other objects to remain loose in the car. The National Roads and Motorists’ Association claim that if you brake suddenly while traveling at 50kmh, groceries in the back seat will hit you with the same force as if they had fallen from a two-storey building. A one-litre bottle of water could hit with a weight of 20 kilograms. When a car decelerates violently, the force of gravity can mean a loose object packs 20 times the punch it would normally. It is worthwhile to take a moment and secure loose objects before traveling.

Consider also that at high speeds, a passenger or a pet that is not wearing a seatbelt becomes a deadly projectile in the event of a collision. Make seatbelts mandatory and consider a cargo cage or a pet harness/seatbelt.

Finally, objects such as cans of soda pop, rolling loose on the car floor have been known to lodge themselves under the driver’s foot pedals. This could lead to malfunctioning brakes and a very precarious situation. Bottom line, keep cars tidy and free of loose objects to avoid distractions and hazardous driving conditions.