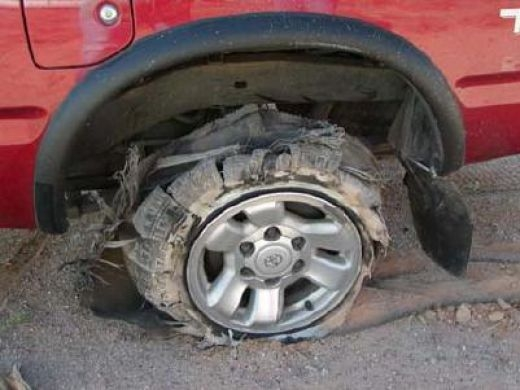 wear & tear! Tires are without a doubt the most critical safety component on a vehicle. Where the rubber meets the road affects traction, handling, steering, stability and braking. Because of this, a sudden tire failure can have serious consequences, especially if it occurs at highway speeds in a vehicle with a high centre of gravity; potentially causing an accident and ultimately an autoinsurance claim.

Under inflation is the leading cause of tire failure. Twenty-three per cent of vehicles have at least one tire under-inflated by more than 20 per cent. An under-inflated tire may not be visibly noticeable; however, they are more prone to damage and failure and contribute to higher fuel costs. The right amount of air for your tires is specified by the vehicle manufacturer and is usually shown on the vehicle door edge, doorpost, glove box door or fuel door. It is also listed in the owner’s manual.

The vehicle owner is responsible for prevention of tire failure caused by improper inflation. Many people seldom ever check their tires. That’s why all 2008 and newer vehicles now have the &ldquo;Tire Pressure Monitoring Systems&rdquo; to alert the driver if a tire is low. TPMS isn’t mandatory in Canada, and so far, there are no plans to make it so. Transport Canada says it is monitoring the effectiveness of TPMS and will not rule out the possibility of mandatory requirement, but also says that it will make no decisions before looking at several issues, including false or no warnings, sensor battery life, long-term system durability, and the extremely low numbers of tire failures cited in fatal collisions.

So even though your vehicle is equipped with TPMS, you should still check your tire pressure once a month and before any longer trips. Tires do not last forever, even if the tread shows little visible wear. As rubber ages, it loses elasticity, hardens and can become brittle. The reinforcing cords inside a tire can also deteriorate and lose strength. This increases the risk of a sudden tire failure the older the tire gets. After ten years, the risk of failure goes up sharply. Because of this, many safety experts say tires that are more than six years old have expired and should be replaced regardless of how much tread is left on the tires.

All tires sold in Canada have a tire identification number molded into the sidewall. This number provides tire retailers specific manufacturing information about when and where the tire was made. The first two characters following DOT indicate the manufacturer and plant code; the third and fourth characters are the tire size code. The fifth, sixth, seventh and eighth are optional. The final four give the manufacturing date. For example, 2602 indicates that the tire was manufactured in the twenty-sixth week of 2002.

The maple leaf following the number indicates that the tire was made in Canada and certifies that it meets Transport Canada requirements.