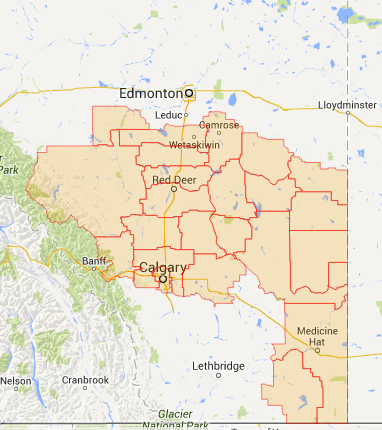 After another long winter it is certainly nice to see the sun coming out once again. But if you live in southern or central Alberta you need to be prepared for the possibility of flooding this week as significant spring runoff is expected to make its way into area rivers and streams. Realistically however, the flooding is more likely to be a plains issue with increases in standing water on roadways and around homes.

This advisory will affect those living in the Cypress Hills and the Red Deer region and extending just south of the city of Calgary.

Spring Runoff Advisories are not all that unusual here given regular high winter snowpack, but it is still important that you stay safe and are aware of your surroundings should flooding occur, particularly when driving. If you find yourself out driving only to come across a flooded roadway we have three simple rules to keep you, your vehicle and your family safe:

Have we made ourselves clear?

Driving across a flooded roadway is just asking for trouble, especially if flowing water is involved. Did you know that the greatest percentage of flood-related deaths are due to a vehicle being driven into hazardous floodwaters? People walking into floodwaters cause the second highest percentage. The common theme here is that we tend to underestimate the power of water.

So instead of tempting fate, we ask that when you approach a flooded roadway you turn around instead of trying to ford it. This is especially important at night when it can be difficult to gauge the depth of standing water.